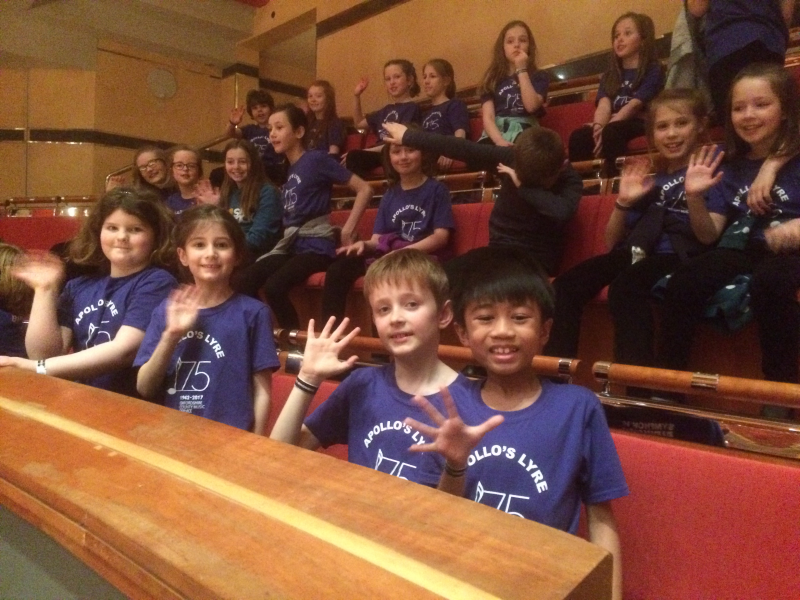 Last Saturday twenty one members of our St Edmund’s choir sang in a special concert which was organised to celebrate the 75th anniversary of the Oxfordshire County Music Service. The children had spent months rehearsing and learning two new works which were commissioned for the event. The piece our choir sang was called ‘Apollo’s Lyre’ and it comprised of six  new songs telling the Greek myth of the creation of the lyre by Hermes, and its adoption by Apollo. The piece was written for an eight part choir and chamber orchestra, and we were one of the thirteen Oxfordshire primary and secondary schools taking part. All of the County Music Service groups performed in the concert in one of the finest concert halls in the world.

Our thanks go to Mrs Semple, Mrs Zielinska and all of the parents who supported the children in their preparation for the amazing concert and who happily collected the weary singers who arrived back in Abingdon at 2:15am the following morning.

A truly memorable experience for all involved.

We use cookies on our website to give you the most relevant experience by remembering your preferences and repeat visits. By clicking “Accept All”, you consent to the use of ALL the cookies. However, you may visit "Cookie Settings" to provide a controlled consent.
Cookie SettingsAccept All
Manage consent

This website uses cookies to improve your experience while you navigate through the website. Out of these, the cookies that are categorized as necessary are stored on your browser as they are essential for the working of basic functionalities of the website. We also use third-party cookies that help us analyze and understand how you use this website. These cookies will be stored in your browser only with your consent. You also have the option to opt-out of these cookies. But opting out of some of these cookies may affect your browsing experience.
Necessary Always Enabled
Necessary cookies are absolutely essential for the website to function properly. These cookies ensure basic functionalities and security features of the website, anonymously.
Functional
Functional cookies help to perform certain functionalities like sharing the content of the website on social media platforms, collect feedbacks, and other third-party features.
Performance
Performance cookies are used to understand and analyze the key performance indexes of the website which helps in delivering a better user experience for the visitors.
Analytics
Analytical cookies are used to understand how visitors interact with the website. These cookies help provide information on metrics the number of visitors, bounce rate, traffic source, etc.
Others
Other uncategorized cookies are those that are being analyzed and have not been classified into a category as yet.
SAVE & ACCEPT
Translate »